Check out The Foally of Man, a podcast featuring Chris the Brony and Robert the non-Brony as they explore Fallout: Equestria chapter by chapter. Watch/listen on YouTube, Libsyn, Twitter, and PodBean.
Mychelle

Added:
Wednesday, August 7th, 2013
Last Update:
Monday, March 16th, 2015
Favorited By:
Be the first to favorite this story!
Romance, Sad, Dark, Crossover, Adventure, Alternate Universe
I would like to tell you that old cliché line of 'War never changes.', but as much as ponies seem to enjoy using it, I think its only telling you half the story. So let’s start with my opinion of the dawn of pony kind. I for one like to think that in the beginning there were sunshine and rainbows, and maybe that time lasted for far longer then we deserved. But, if I am allowed one good cliché line here, it would be that all good things have their end. Because that’s just how this damned world works. When things did end, it wasn’t the end of the world. Ponies actually hadn’t destroyed their world like most still believe. It was simply reduced to a much darker version than the original. The whole ‘balance of the universe’ must continue, and our days in the sun had simply run dry. For some, they survived in their Stable-Tec glorified prisons when fate raised its ugly head in clouds of pink and green fire. Some, either willingly or by force, met their demise by either of the two. And then there were the select few that ran for the heavens. But unlike their comrades that rose to follow their princesses or whatever deities they chose at that time, these ponies stole the heavens for their own safety against the apocalypse. 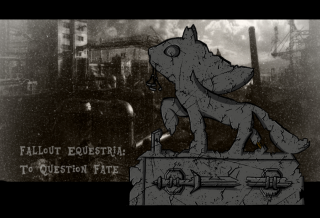