Check out The Foally of Man, a podcast featuring Chris the Brony and Robert the non-Brony as they explore Fallout: Equestria chapter by chapter. Watch/listen on YouTube, Libsyn, Twitter, and PodBean.
Relyet

Added:
Tuesday, October 15th, 2013
Last Update:
Tuesday, April 28th, 2015
Favorited By:
Be the first to favorite this story!
Dark, Comedy, Crossover, Adventure, Alternate Universe
Two ponies walked across the equestrian wasteland. A mysterious mare behind a mask and an oversized stallion. They aren't there to be heroes, they don't want to make new friends, and they aren't trying to make the wasteland a better place. But just how easy is it to remain neutral in the wasteland? (My first attempt at any form of pony fiction, and my first FoE sidestory, and the first bit of writing I've ever published. Here goes nothin'. Cover art 'borrowed' from Lightning5Strike over on deviantart until I can make my own.) 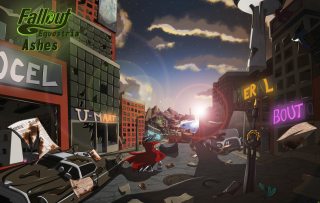