Check out The Foally of Man, a podcast featuring Chris the Brony and Robert the non-Brony as they explore Fallout: Equestria chapter by chapter. Watch/listen on YouTube, Libsyn, Twitter, and PodBean.
Kervin

Added:
Tuesday, October 15th, 2013
Last Update:
Saturday, November 9th, 2013
Favorited By:
Be the first to favorite this story!
Tragedy, Dark, Crossover, Adventure, Alternate Universe
Roadside has been a part of a lot of stories in his time, but there was one story of his that he knew he'd never forget. Out of all the death, tragedy, and remorse that the Wasteland brought up, there was one little thing that he found called hope. Stumbling into a situation he never predicted he'd find himself in, Roadside has to confront relying on ponies other than himself for once. Thrust from his complacent life as a drifter, he finds himself in a place where loyalty, honesty, and friendship matter a lot more than he had previously assumed. [i]Note: Chapters One and Two are currently under revision...[/i] 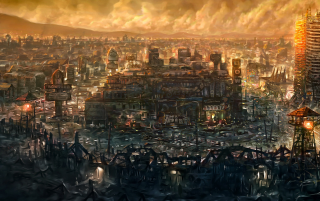