Check out The Foally of Man, a podcast featuring Chris the Brony and Robert the non-Brony as they explore Fallout: Equestria chapter by chapter. Watch/listen on YouTube, Libsyn, Twitter, and PodBean.
jasontaylorblogs

Added:
Thursday, November 7th, 2013
Last Update:
Sunday, October 20th, 2013
Favorited By:
Be the first to favorite this story!
Dark, Crossover, Adventure, Human
It was science that supposedly saved the world. It was science that everyone studied. But when Wits Lucid is the victim of an experimental procedure, he’s led down a path that threatens to tear his mind apart. Not only does his own personal sanctuary start to betray him, but he’s cast out into a world ravaged by war and time. Faced with the challenge of overcoming both his own illusions and the wasteland horrors around him, he must find a way to fix the fragments of his mind…and maybe help the wasteland while he’s at it. *Cover art by [url=http://www.fimfiction.net/user/EagleQuill01]EagleQuill01[/url]. His [url=http://eaglequill01.deviantart.com/]deviantART[/url] page.* 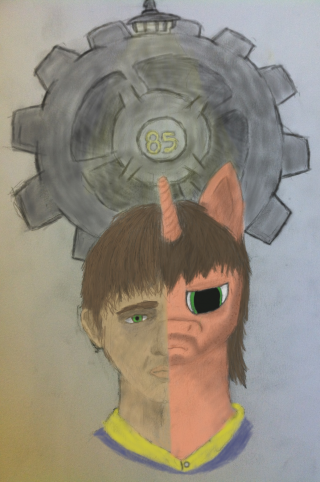