Check out The Foally of Man, a podcast featuring Chris the Brony and Robert the non-Brony as they explore Fallout: Equestria chapter by chapter. Watch/listen on YouTube, Libsyn, Twitter, and PodBean.
NitoKa

Added:
Wednesday, January 8th, 2014
Last Update:
Tuesday, February 4th, 2014
Favorited By:
Be the first to favorite this story!
After the Great War, when Megaspells rained from the skies; those not lucky enough to make it to the Stables, took to the sea. Sailing to Summer Sunset Isles resort, in hopes that such an out of the way location would be spared the holocaust. The initial refugees were cut off from the rest of the dying world by a great wall of wild weather that destroyed all that attempted to brave it. Now 200 years since, a tribal Seapony on an errand has a chance encounter that would lead to the changing of the Oceanic Wasteland forever. 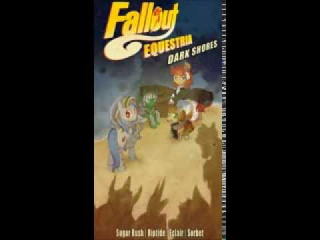