Check out The Foally of Man, a podcast featuring Chris the Brony and Robert the non-Brony as they explore Fallout: Equestria chapter by chapter. Watch/listen on YouTube, Libsyn, Twitter, and PodBean.
Arowid

Added:
Monday, February 17th, 2014
Last Update:
Friday, January 19th, 2018
Favorited By:
Be the first to favorite this story!
Dark, Crossover, Adventure
Is blood truly thicker than water? No one could answer that question better, or in more exhausting detail, than Candy Stripes. As a talented doctor in Stable 76, Candy has nursed more ponies back to health than most of us will ever know. But the patient that she has spent the most time healing is none other than her brash little sister, Nohta. When the two of them finally have a chance to join their stable’s caravan, and explore the ruined wasteland of Equestria like their parents once did, the pair begin to learn truths they had never imagined possible. But sometimes the truth isn’t what you wanted. Sometimes it’s not even something you could fathom in the wildest of dreams. Sometimes the truth is just a wound; a terrible affliction for which there is only one cure. What if the only medicine that works is a pill too bitter to swallow? 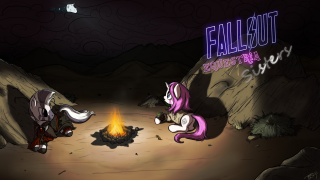