Check out The Foally of Man, a podcast featuring Chris the Brony and Robert the non-Brony as they explore Fallout: Equestria chapter by chapter. Watch/listen on YouTube, Libsyn, Twitter, and PodBean.
Pen Mightier

Comedy, Adventure, Alternate Universe
I'm just a toaster repair pony. An actual one. I'm glad to say I know exactly how much my life is worth, which is more than can be said of most out here in the wasteland. It's worth exactly 50 grand in caps. And my collectors are collecting by auctioning me off as this 'Stable Dweller' pony, whoever she is. But Celestia threw me a bone for once. Not only did I find the perfect disguise to lay low, it came with a mission that would cover my debt and then some. All I need to do is step into not only this dead stallion's shoes but also his armour and masked crown and carry out his final mission - deliver a StableTec pod to the Falls and score 100 grand. Except the armour came with a built-in battle-saddle-mounted Crusader maneframe boasting the most annoying A.I. ever who calls herself Lyra Heartstrings, the StableTec pod isn't really what it seems, I end up babysitting the unluckiest band of crazies in the wasteland, and the dead guy whose shoes I stepped into? Apparently he's the all-infamous Luna-damned Crystal Emperor himself. And let's not forget the bomb collar around my neck whose detonation is conveniently held off by a battery-powered matrix-disruption device...and I'm all out of batteries. Oh, and this spritebot is insisting I make some friends. There is no way this can go wrong. [rule] Set in the [url=http://www.fimfiction.net/story/119190/fallout-equestria]Fallout Equestria[/url] universe by [url=http://www.fimfiction.net/user/Kkat]KKat[/url]. Written while listening to the [url=http://www.youtube.com/watch?v=KRpBgGiJuMc]Fallout Equestria Mane Theme by StableTec Studios[/url] 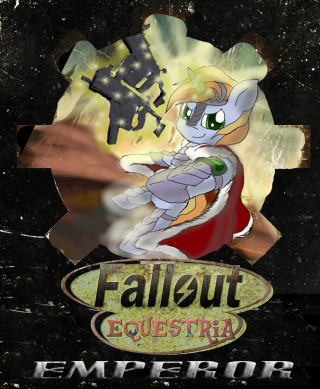