Check out The Foally of Man, a podcast featuring Chris the Brony and Robert the non-Brony as they explore Fallout: Equestria chapter by chapter. Watch/listen on YouTube, Libsyn, Twitter, and PodBean.
JustMoth

The “Sights Sounds Souls” Project is a unique (and insane) take on storytelling for the Fallout: Equestria universe. Instead of one story being told one way, it will be three different perspectives of the same story told in three different ways. These will perspectives will be told in the stories “Fallout Equestria: Sights”, “Fallout Equestria: Sounds” and “Fallout Equestria: Souls”. Each part will (hopefully) stand as a self-contained story, but by following all three you’ll get the whole story. These audio logs are just part of a larger narrative. -To see the bigger picture, take a look at Fallout Equestria: Sights. -To get more of the whole story, read Fallout Equestria: Souls. -Follow the progress of all three stories at the project\'s Tumblr. Sights: \"Sights\" follows the travels of a stable pony venturing out into the equestrian wasteland 100 years after the war ended. Even the first day out, Lemon Zest must overcome memory loss, a hostile desert, and worst of all… RATS! Sounds: Follow the audio logs of Clutch Gumstone, a Tenpony Tower technician who is out to make history! Not directly of course, that\'s way too dangerous! He needs to find just the right pony for the job... Souls: Set 100 years after the war with the zebras violently ended, this is the story of an unlucky trader who suddenly finds himself dead and his afterlife somehow tied to two strange ponies. He now has to try and figure out daunting questions such as: Who are these ponies? Why is he stuck following them? What happened? Where are his hooves!? 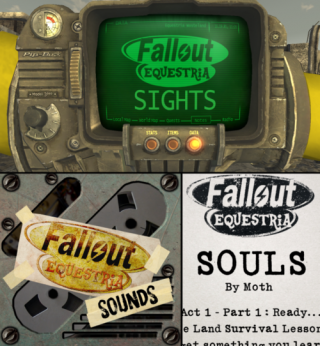